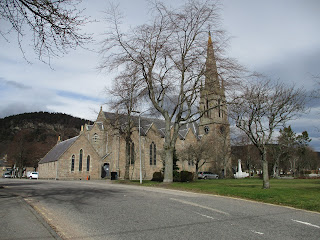 Here's the centrical church in Ballater, the Church of Scotland or Established Church as it's now known.
But Hippolyta and Patrick are Episcopalians, a denomination which nowadays has most in common with the Anglican Church and is a member of the Anglican Communion. However, despite the fact that it was sometimes called the 'English Church' in fact it stemmed from the post Reformation church in Scotland, preferring to revert to the authority of bishops than to become wholly presbyterian (this is a very potted history!). Patrick is from Longside, which was a cradle of the Scottish Episcopal Church, and Edinburgh, Hippolyta's birthplace, was quite mixed even at this period.

An early Episcopal congregation in Glenmuick came to grief, like so many, in 1698, and thereafter Episcopalians in the area kept their heads down during years of religious strife. The nineteenth century saw more tolerant times, as well as an influx of English tourists looking for a familiar church in which to worship. After several decades of occasional services held at a private chapel in Glenmuick, a mission was established at Ballater in 1897 – this was in an iron church, dedicated to St. Saviour. The current Episcopal church in Ballater was finally built in 1907, and when a full time clergyman was at last appointed in 1945 the church was rededicated to St. Kentigern, more usually a saint associated with Glasgow (it’s another name for St. Mungo - coincidence?). 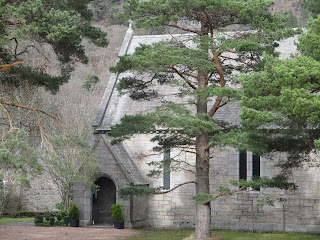 Bishop William Skinner, who is mentioned in A Lochgorm Lament, was a very prominent figure in Episcopal history though not quite so much as his father, John Skinner of Longside (where Patrick was born), who had also been Bishop of Aberdeen. Both bishops are commemorated at this, the Moir of Stoneywood burial site, in St. Peter’s Cemetery in Aberdeen – you might remember the Moir family from The Slaughter of Leith Hall! 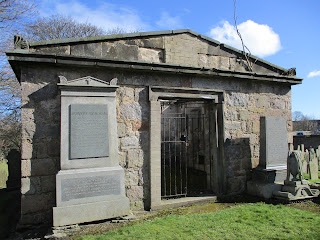 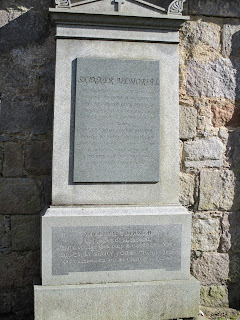 Posted by Lexie Conyngham at 02:34