Hooray! Here it is again! The bloghop of the year! I'm late, for which I apologise, due to circumstances beyond my control, so I hope I'm not going to be barred.

This year I decided that as I've been writing about what I've been reading each month, including some of my favourite authors, I'd go back and comment generally on my reading history and how this madness for books started.

Though, to be honest, I can’t even remember – I think I may have been born with it! I come from families where people lose themselves in corners with books every day. There were certainly plenty of books around in the house, and my father was a regular visitor to at least three local libraries so of course we went, too. I read and re-read, and loved having stories read to me, too – I now love reading them aloud to other people.

I can hardly say what my favourite book was as a child: it's so, so difficult! When I was ten I remember reading Robert O’Brien’s The Silver Crown, and being so disappointed when it finished because I wanted it to go on forever. I knew Winnie the Pooh about word for word, and read my copies of the Chronicles of Narnia till they nearly fell apart. Noel Langley’s Land of Green Ginger was another one that fell to pieces – but I still have it! Norman Hunter’s books, Professor Braynstawm and the rest, were others I read and read. As a teenager I’d already discovered crime novels, and Dorothy L. Sayers and Ngaio Marsh were my favourites. Sayers’ Murder Must Advertise was probably top of the list. Jane Austen and Charles Dickens also featured prominently, though – I wasn’t put off by having to read such books for school. It was all just lovely reading!
The changing point that changed me from a reader to a writer, if that is the case, was early, too. I was always writing stories, and when I read my first Agatha Christie, aged about eleven, I realised that I wanted particularly to write crime mysteries. The combination of a plot that is character-driven and a puzzle was irresistible.

Amongst my own books, I think Death of an Officer’s Lady is probably my current favourite – though I like all of them. For years I’d been interested in the Battle of Waterloo, and intended to find some way to write about it, and there I finally did it. I had planned it so carefully and done so much research that when I reached those chapters, it all simply poured out and I wrote 12,000 words in a day – a record for me!
In terms of characters in my books, people seem to have warmed to Walter, Murray’s trainee manservant with the appalling sense of direction. He’s a solemn boy but occasionally finds humour in a situation, and always manages to get his own way. I particularly like Robbins, the butler, and his Islander wife Mary: they’ve been with me for a long time.

If I could meet one author from any time era, I think it would be Dorothy L. Sayers, and we’d talk about crime, universities and religion. Or Marcus Tullius Cicero – I did once dream I was talking with him in Latin, but I can’t remember what about! He has the reputation of being pompous but there was a vulnerable side to him, too.

Now for the giveaway: until 19th. July you can use this code on Smashwords to buy a copy of Thrawn Thoughts and Blithe Bits - LZ34Y.

It's a collection of short stories, some featuring Scottish Georgian detective Murray of Letho, some not; some seen before, some not; some long, some very short. Find a whole new dimension to car theft, the life history of an unfortunate Victorian rebel, a problem with dragons and a problem with draugens, and what happens when you advertise that you’ve found someone’s leg.

Book of the Month for June - Jamba 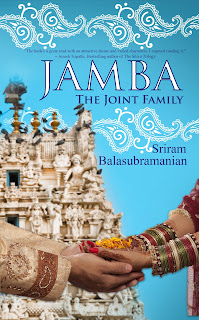 My monthly reading report is a little late for June as I'm taking part in a bloghop for this new book: 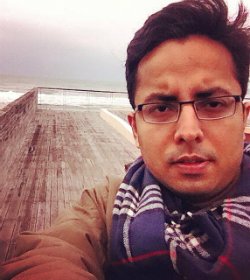 In an age when families are becoming more nuclear, Karthik's family was an aberration: It was a large joint family with its own complications, contradictions and commonalities. Two love stories and a wedding get intertwined within the family at the same time. One of them could make or break the joint family, will the family survive? Will the love story succeed? Will the younger generation respond to the needs of the family? How will the older generation respond to the changing perceptions of the younger generation? Will the family eco-system survive?
In an India swamped by globalization, this racy and humorous story tries to dissect the generational changes in Indian society and how the Indian society is responding to the changes.

Sriram Balasubramanian is a Writer who has contributed extensively to international publications such as NYT, WSJ, Foreign Policy, Forbes India, and The Hindu among others. He has interacted with a variety of global business leaders and policy makers in his experience as a journalist and writer. His main area of focus has been on human development, education and socio-economic issues with a global context.
Besides this, he has a Master’s Degree from University of Southern California and is pursuing another degree at Columbia University in NYC. He is also authoring another book on the World Chess championship which was held recently.
He is very passionate about India, its cultural ethos & socio-economic evolution. He can be reached at @Sriram316 or http://www.facebook.com/jambathenovel20 or http://www.srirambala.in

This is a book narrated by a young Madras Indian man and the energy of the narration fits that perfectly, even to the sometimes curious pacing, slow one minute, quick the next. His character is similar, with odd moodswings, flare-ups and laughter, while every now and then he stops to explain something from the past. The story is very much about one extended Tamil Brahmin (TamBram) Hindu family and how the narrator fits into it, resenting it and loving it at the same time. His beloved but disabled cousin is about to be married, which is cause for various relations to return from America and show off their American lifestyles to those who have chosen to stay behind: some envy them, others defend the land of their birth, but no one is completely straightforward in their attitudes. Amongst those returning is another cousin, one with whom he has never got on, who is now secretly dating a Christian – a situation which might throw the whole family into chaos and jeopardise the wedding. It’s a love song to Madras and Indian tradition, and indeed to his grandmother (Jamba patti of the title) who seems to embody both for him. In fact, the descriptions of his grandmother and his relationship with her are positively hyperbolic: in one instance he writes ‘As usual, my grandmother showcased her her hospitality by offering her a cup of coffee.’ Often the use of language is strange and repetitious even for Indian English, a good edit of extraneous detail would help, and there are many instances where the author would have benefitted from the old advice to show, not tell. But it is full to the brim of innocent energy and enthusiasm, and it’s an enjoyable, fast-paced read!

Now I have to attach those odd bits at the end that always defeat me - let's hope I get them right this time!

Posted by Lexie Conyngham at 01:44 No comments: