Reading in August and September - when there was time ...

It's a low count for books read over the last two months, but that's not to say I didn't appreciate them! I'll only put up the first cover this month as I am, as usual, running to catch up with myself - apologies to all those cover artists I'm missing out! 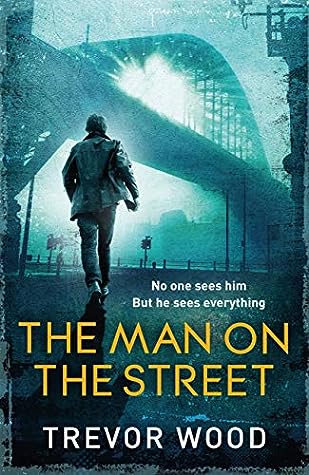 Trevor Wood, The Man on theStreet: Written from the point of view of a homeless ex-naval man in Newcastle, this is a thoroughly enjoyable thriller-whodunit with interesting and likeable characters and an authentic feel to the setting. A book that lingers - must get the sequel.

The Ice Killer, RossGreenwood: I love Mrs. Chan. I’d like her to come and work with me, but I’d also be incredibly reassured to think that every police station has a Mrs. Chan on their payrole – preferably high up on it. Otherwise this is cleverly written and appealing, the narrative alternating between the police activities and a woman named Ellen, who is finding out more about her past and how it is dramatically affecting her present.

Jason Vail, Missing: After a bit of trouble of his own, Steven Attebrook goes looking for the children of his old friend Harry, and ends up with another missing person case along the way and a little problem with warring armies. Odd Americanisms like ‘teamster’ crop up, but in general this feels quite British and is as usual entertaining, though I felt the political history weigh a little more heavily in this (with the occasional paragraph of explanation of military allegiances and manoeuvres). Though it has a satisfactory ending in itself, it is also setting up the plot for the next book to which I shall, as usual, look forward.

Jim Napier, Legacy: St. Gregory’s is a junior Oxbridge college on the loose round about where University College London is situated (or SOAS or SEES, so it could be any of them). It has the usual collection of scholarly misfits and a few interesting students, foreshadowed by a poignant preface. When a mature student goes under a bus suspicion goes about amongst the staff, while McDermott, an alumnus of St. Gregory’s, hopes it will not fall on his old tutor. This has a very traditional feel to it with some subplot to do with McDermott’s family and personal life and an enjoyable relationship between him and his subordinates.

Stuart McBride, TheCoffin-maker’s Garden: I’ve tried the Ash Henderson series before and not enjoyed it as much as the Logan McCrae ones, but I liked the sound of the premise of this one so thought I would give it a go. The fictional setting, Oldcastle, is thoroughly grim, but in this one at least the characters get to go out and about a bit and there is some humour. Still, I didn’t feel it drew me in completely – I was able to leave it for several nights at a time. It’s certainly gritty, but in the end I enjoyed it. I’m not sure I’ll be rushing to get another one in this series, but who knows?

Joy Ellis, Crime on the Fens: I found the beginning of this very unappealing, and left it for a few months before a desire to tidy up my Kindle drew me back to give it another go. And then it caught me, for the most part: the main characters are interesting and I enjoyed the relationship between them, and gradually the team behind them came to life. It’s a shame that there’s a lot of wandering punctuation and some poor editing that pulls you out of the story. I also found a few aspects of character development a bit unbelievable, but I could warm to these books, I think. I have a set of five so I hope the rest are enjoyable!

John Gaspard, The Bullet Catch: Quite an entertaining mystery with a magician as the detective, looking into protecting an old school friend who fears being shot in the course of making a film, and another old school friend suspected of murdering her husband. There’s a great deal about the lives of stage magicians and their tricks here which makes for an interesting read, though I think there’s nothing to worry the Magic Circle. I think it’s the first in a series and if someone threw the next one in front of me I’d be happy enough to read it.

Deryn Lake, John Rawlings Investigates – Death in the Dark Walk: This is set in the mid 18th century in London, and is not immediately gripping, though that may be my fault as I lost track of the book for a while. It seems to be a rule that any book set in this period and place must feature Vauxhall Pleasure Gardens, and that indeed is where the murder takes place. The book is soaked in period detail, sometimes to its detriment, and I found the habit of calling the main character the Apothecary (particularly when he hadn’t really established himself as one just yet) a bit irritating. John Fielding is convincing as the real-life magistrate, and I quite enjoyed meeting other real historical characters in the course of the investigation. It was fairly easy to guess who the murderer might be but it still made quite an entertaining read – I have four in a box set and hope they settle down a bit as the series continues.

Well, there we are - and I'm already reading the next Deryn Lake and Joy Ellis. Meanwhile I'm two-thirds of the way through The Bear at Midnight, Orkneyinga 4, which I really should have finished two weeks ago. Never mind ...

Posted by Lexie Conyngham at 01:27 No comments: