A plague for frogs

No.3 Cat is really going to town on frogs at present. He doesn't seem to hurt them, but he definitely traumatises them. We caught and put out three on Sunday alone, then heard squeaking outside. We found him with his paw on a fourth, which was lying flat on its stomach with its paws / claws over its head, squawking. Removed cat.
They don't seem particularly bright, frogs. Perhaps it's a local thing: I've been worried for a while that rescuing those two batches of frogspawn from the gutter in the spring was perpetuating a local inferior genepool. However, they are easy to catch and put outside, and come in a wide variety of attractive colours!
Not sure why I'm blogging at all, as I'm in a race to finish A Knife in Darkness by the end of the month, and I can't do Sunday or Tuesday and not much on Saturday, either. September is looming, that insane month, during which I have to start the next in this series to have two ready to read through before publication at the end of December (I hope), and then I can start the next Murray book.

By the way, if anyone would like a PDF of the new book in advance in exchange for an honest review on Amazon and / or elsewhere, please send a request to contact@kellascatpress.co.uk. The PDF should be available on 28th. October, and the release date is (at present, anyway, and it's not likely to get any closer!) 30th. December. All published reviewers will be entitled to a free PDF of the second in the series, Death of a False Physician, due out on the same date (assuming you want one!).
The weather is fine and I should probably be at the allotment, guarding my brassicas. But instead I'm writing about thunder and lightning, rain and gales, and feeling rather chilly!
Posted by Lexie Conyngham at 02:03 No comments:

Festival of Edinburgh, and domestic life

Well, survived a day of the Edinburgh Festival - never used to enjoy it much! However, a visit to Dynamic Earth, a paddle in the pools outside the Parliament, and a few hours sitting writing and people watching in Princes Street Gardens was tolerable, even fun, on a very hot day. Greetings to the lovely lady from Bedford who rescued two shield beetles from the busy footpath, then politely asked me if I was writing a novel. I had to confess I was, and she very kindly took my card. I hope she enjoyed the Tattoo!

It's hot again today, and the cucamelons have taken over the end of the kitchen to such an extent it's difficult to hang laundry up on the lines there. I'm going to cull a hundred of the little fruits today again to try to encourage the others to grow: we've harvested four so far and they taste like lemony cucumbers, though rather petite. Not sure I'd grow them again as a food crop, but it's been very amusing watching them grow so rapidly: one suspects that if anyone sat still for long enough at the kitchen table one would return to find them absorbed into the plants.

Unfortunately we seem to have two frogs in the kitchen now. I've liberated three, but unsourced croaking continues. I'm scared of crushing one of them in my searches, so I'm going carefully - I did see one, but it panicked and fled in the wrong direction and I lost it again.

One of our official household (as opposed to the frogs) has sadly died, but peacefully and at the great age of three and a half - great, that is, for an adopted dwarf hamster. Known affectionately as Heidi Custard Girl, she was fond of spending time upside down, and had the most beautiful silky grey and white coat. Funeral has already taken place.
Posted by Lexie Conyngham at 04:26 No comments:

Just been doing a blog interview with the likeable Wayne Tummel - now I'm looking forward to reading his book, The Count of the Sahara! His amiable blog includes interviews with much better historical fiction writers than me, so take a look.

Meanwhile reading the latest Shirley McKay, and nearly finished Rose Tremain's Restoration at last. And I have sixteen chapters of the Ballater book written: just nine to go. It's been giving me serious grief, but I think I'm on my way at last! 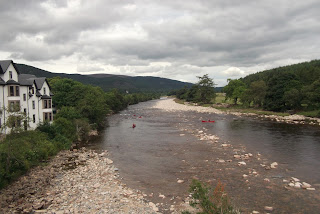 Posted by Lexie Conyngham at 11:56 No comments: