I've been aiming for the 28th. of each month blog about what I've been reading, but this month I spent the 28th. on a beach watching grey seals, a whole long squad of them on a sandspit. They roll and wallop along on the sand, occasionally squabbling clumsily, sometimes slipping into the water to cross the estuary and come to take a closer look at the idiots watching them, and all the time they keep up a collective keening like the wind down a chimney on a stormy night. 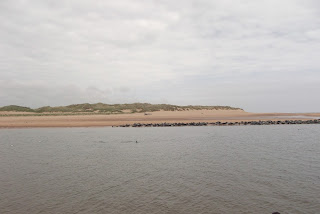 The beach is great, a real mixture of fine steep sand nibbled by the waves, streeling seaweed, and areas grey as moonrock where everything is covered in the densest crusting of barnacles.

It's been a pretty mixed month and I've waited till the last moment to decide which authors to go for this time. I've been reading books by David Haynes, David Hadley, Pamela Kelt, Benjamin Black, Fred Vargas, and others, as well as trying to devour factual books as research for my own next book. However, I've finally made my selection, though this one is going to be quick! 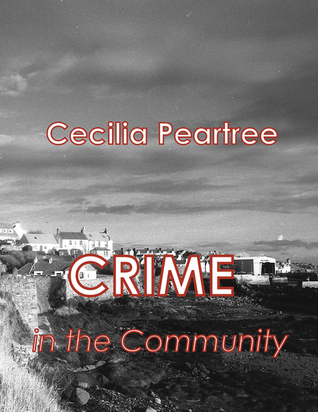 Cecilia Peartree writes the Pitkirthly series set in a small town in Fife where the death rate is preternaturally high and all cases are investigated by semi-retired spy Amaryllis Peebles with her spiky red hair and the slow but stubborn Christopher, archivist at the Cultural Centre. They are constantly assisted and confused by their group of actively retired friends and a couple of dogs in a manner that frequently makes me laugh out loud, particularly in their dealings with the local police and scones. 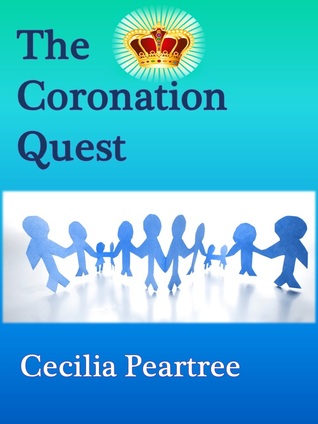 Cecilia Peartree also writes the Adventurous Quests series set in the 1950s, starring Flora and Oliver Quest, both marked by their experiences in the war, and his mathematically-talented sister Clemency. This series has a different charm: in both the settings are very realistic, with a real feel for the 1950s period in the Quest series, but I think Pitkirthly's characters draw me in more with their daft fixations and rituals. When I saw there was a new one last week I instantly clicked on it and have already finished it: The Pitkirthly Triangle is just as good as the rest!

In both series it's worth checking every now and again to see the book covers - they often change!

Kate Ellis is my mainstream crime author this month. She's the author of the long-running (yet mysteriously still not televised) Wesley Peterson series set in Devon. Wesley Peterson is a black policeman in a very white world, married to a teacher and with a high-achieving medical family who do not always quite understand why he chose his career. His degree is in archaeology and there is a strong archaeological element to each plot, always appealing to me. That she has managed to sustain this through so many books is a tribute to her strong characterisation of her leading figures who are, at heart, fairly ordinary, but very sympathetic and believable. I particularly like his boss, overweight, amiable choral singer Gerry. These books are very much an observation of how ordinary people work together in life. 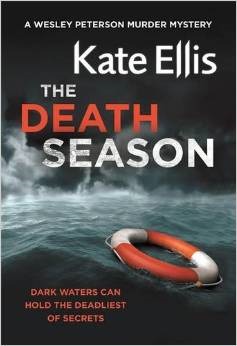 They can be read out of order: the most recent I've read is The Death Season, where the death of a child ten years before is woven into a Great War diary, and the odd behaviour of Wesley's wife's new friend is linked with the plot, but not in the way I expected!

One rock is spared half a covering of barnacles - so far 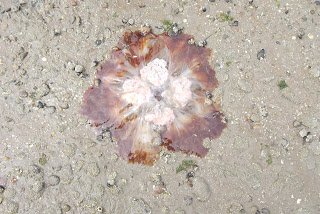 A jellyfish flower on the beach.


Posted by Lexie Conyngham at 06:37 No comments: 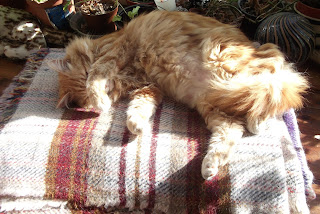 No.2 Cat, being a long-haired strawberry blonde, does not appreciate this alien light in the sky.

No.3 Cat, being by nature a cross between a polar bear and a labrador, retreats to the shady side of the room. 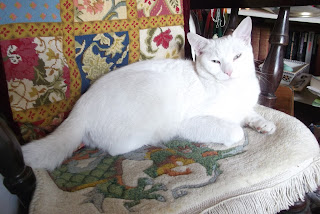 Posted by Lexie Conyngham at 02:41 No comments:

Shelfie of the Month 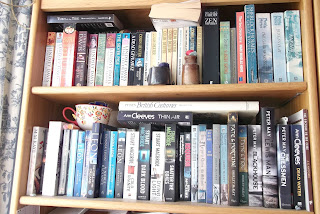 I thought it might be fun to post a few shelfies, so this is the first - plenty of bookshelves in this house! This is beside my desk, the top couple of shelves of a tall bookcase which mostly contains crime fiction - but you can see a research book has crept in, too. I use these pretty cups from Anthropologie to hold all kinds of things - this one has tubes of seed beads in it for a beading project (now about three years late, but maybe some day!).

Slow Death by Quicksilver is edited, but I'm now proofreading - two chapters down, twenty-three to go! But the sun is out and the garden is calling - have to fix a hotbed, and there are other DIY projects urgently requiring my attention. I think I could do with another couple of days in the week!

Hello to readers in Russia, by the way! and some newcomers from Portugal!

Posted by Lexie Conyngham at 01:42 No comments: