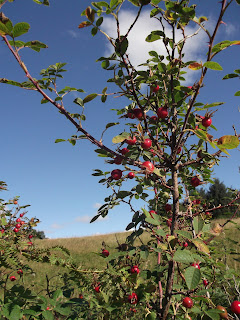 Child labour is a marvellous thing. With a bit of help I have some pots of rosehip jelly and some pots of blackberry jam, and two happy children not particularly badly scratched or muddy! Of course in the Second World War children were indeed paid to collect rosehips to provide Vitamin C to a population missing its citrus fruit. It's a bit of a dilemma, though - the big rosehips are quicker to top and tail but not as tasty, while the small ones are better but fiddly. 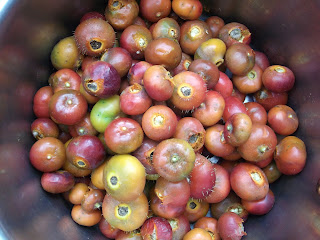 Very excited about the new Goodreads UK Kindle Forum's joint opus, A Splendid Salmagundi, due out soon. A Goodreads Gallimaufrey was the first in this (I hope lengthy) series, a mixture of poetry, short stories and recipes from members of the forum, whether published authors or not. This time I've managed to be organised and have submitted a couple of short stories - not really my field but fun to try from time to time! Anyway, it's going to be a really good read despite my efforts, so buy, buy, buy! And thanks to all those who have the patience to put it all together!

Posted by Lexie Conyngham at 01:44 No comments: 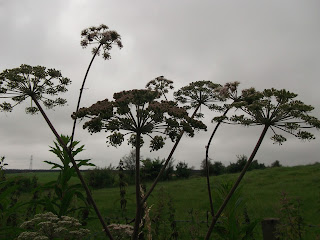 The smell of autumn is in the air - a lovely season. Curlews are stitching their way between the straw bales in the fields, the leaves are contemplating turning, and it's blowing a gale. Thanks to the wind I had to tack along the seafront on the bike today, but managed to avoid hitting the stoat that slid out of the grassy bank just in front of me and pottered across between busy commuter traffic to the other side of the road. The first peas have finally appeared on the allotment (we're eating our weight in broad beans and tatties), the first students have appeared around the university, and at last I can pull out some winter woollies. I am not a summer person!

I have changed the cover on Service of the Heir this week as my kindly graphic designer went to Edinburgh and took some photographs in Greyfriars Kirkyard, where Murray's father is buried in the course of the book. There were so many good photographs it was hard to know which to pick! I've never been that happy with the cover so this is a vast improvement. Of course, it's not quite the same as the cover of a book in a bookshop, where people might easily be drawn across the room by a good cover - Amazon and Smashwords don't exactly lay all the ebooks out for you to take your pick based on appearances! But I'm waiting to hear if Waterstone's is interested in stocking hard copies of Death in a Scarlet Gown, so appearances are becoming more relevant, perhaps.

Advertising is expensive! I've just been on a site called Bookriot and it claimed to have simple, easy to pay advertising. Well, yes, they do: and I thought $11 was quite reasonable for 1,000 views of your advert. Appparently, however, they don't sell advertising in such small batches: when I went to check out I discovered I would be paying $1,100! Needless to say I backed off fast - an innocent abroad, definitely! But I need to do something to improve North American sales - I wonder what?
.
Posted by Lexie Conyngham at 06:41 No comments: