There's something going on in the bathroom. The cats have opened the door to the cupboard under the bath (contents: the usual back up bottles of shampoo and back log of contact lenses) and are spending a great deal of time interested in it, and now Number Two Cat has been found there with an allan key ...
Posted by Lexie Conyngham at 05:42 No comments:

Just as a follow up to the last post - I love felting. Wool is my main medium for crafting, and knitting is probably the thing I do most, but there's also weaving, and spinning, and felting (and occasionally crocheting). There's wet felting (happy memories of working in a basement in a village in Fife, with the gas heater on inside and the snow outside and the door open as we were all working so hard on our felt slippers and trying them on as we went, leaving sopping footprints round the stone floor), prefelt (where the fibres have already been made loosely into felt and then you can cut them and work them - some people think this is cheating but it's just another way of getting there, from my perspective), and dry felting, where you are dangerously armed with barbed needles and use these to tease and harden loose fibre into sculptural shapes, or attach a pattern to cloth. There's also a hybrid called knitting to felt, an unpredictable science, in my experience, and that's what went wrong today.

Now, before I disgrace myself, here are a few of the better results: 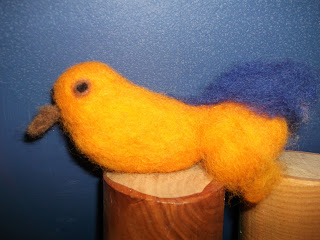 As I said earlier, I'm not an expert in making birds, but I quite like this needlefelted one with its squiffy tail. 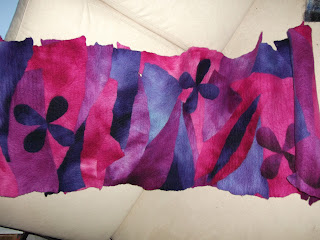 This is a prefelt wall-hanging, made on another lovely day in Fife where everyone had a great time and was happy with what they made - sunshine through tall windows, lots of soapy water and a buzz of creativity. 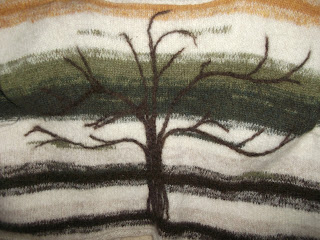 This is the back of a waistcoat, knitting from roving (unspun wool) then felted, then the tree was needle-felted on with more roving. Now, knitting to felt is, as I said, unpredictable. American books talk of hot washing the knitting in your washing machine with a trainer or two, and lifting it out periodically to see how much it has shrunk. From this you will gather (or you ought!) that Americans favour the trendy twintub machine, with a door on the top! I go instead for the front loading washing machine and gentle washes till it goes down enough - but for some reason, sometimes it shrinks, sometimes it expands, and sometimes it does both.
Now, I had this project in mind. I had seven lovely balls of Rowan colourscape wool, bought in a sale, and I thought if I knitted thick i-cords from it and made six squares of the i-cords, then stitched the last i-cord as a border round the six squares stitched into a rectangle, and felted it, I'd have a nice rectangular bedside rug. Well, it's taken ages, but today I finally felted it in the washing machine. And I can't help feeling that it's a bit more, um, three dimensional than a bedside rug ought to be! 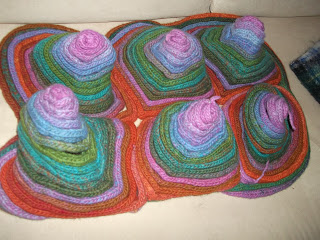 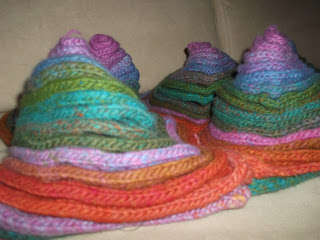 A little reworking might be required ...
Posted by Lexie Conyngham at 11:11 No comments:

I've knocked one job down to two days a week for the moment, and the other three jobs are hovering, so I'm beating on with typing and editing and I'm now just over 3/10 through Fellowship with Demons. No ideas for the cover yet. It's based on a couple of documents I found long ago in the National Archives in Edinburgh, a real trial and a real oddity, a letter to Edinburgh Town Council from a basket maker. A lady had called at the basket maker's shop asking him to look after a hamper for her for a couple of hours and she had never come back for it, and when he opened it he found it contained human bones, and being a sensible tradesman, well aware of health and safety legislation as it stood in 1808, he wanted the Council to come and take it away.

I'd love to try basket weaving - did a chair seat and a stool once and my fingers have just about recovered. But craft is an awful distraction and someone started a craft thread on the Good Reads website, and it keeps drawing me in! Recently I discovered decoupage, but making your own shape, not just buying one, and it's completely addictive - I'll just put another few pieces on, I'll be finished in a minute, honestly! 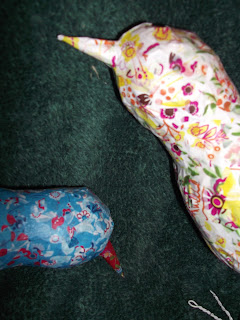 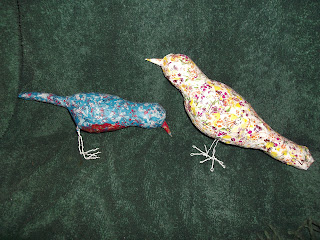 Well, I never said I was any good at birds! I seem to be building up a small aviary, however: knitted, needlefelted, woven willow, that kind of thing. All awful. It's a way of passing the time.

Posted by Lexie Conyngham at 02:12 No comments: