The first geese of the season, skeining overhead with echoing cries, caught me on a fresh damp walk up and out of Ballater (seen here looking back with Craigendarroch looming) on the South Deeside Road, Patrick Napier's commute to see his patients at Pannanich Wells Hotel. The air is still a tonic, and the wells are still there beside the hotel. These days they are cared for by Deeside Mineral Water, who bottle the blended produce of the springs and send it around the world, proof that it is a pleasure to drink. Fiona arranged the visit and Rob, the production manager, showed me around. The water, which runs clear and colourless but leaves russet iron deposits as it goes, is said to rise from the level of the Dee itself, far below, pumped by natural pressure: it never changes temperature nor force all year round. The hill runs with burns, but this is the magic one.

Back in the village I walked the same street as H.M. the Queen did the day before, as she visited those whose homes and businesses are still suffering after last year's floods. Deeside Books is still not open, though operating on line. Barry the Butcher, or Sheridan's, is up and flourishing. Everyone has to go at a different pace.

Though the rain had eased, I popped into the centrical church, too modern for Hippolyta just yet even if she were Presbyterian, and was greeted by two friendly flower-arrangers. The stained glass is a lovely mixture of old and modern, and this one in particular caught my eye, portraying as it does the Dee in spate past the town. It was gifted by Mike Sheridan in 2006. 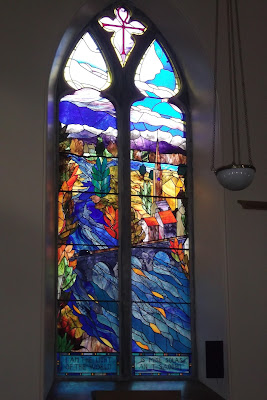 'I am the Light of the World', it says: 'Is Mise Solas an T-Saoghil'. A delight.
Posted by Lexie Conyngham at 09:45 No comments: 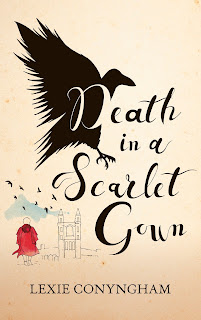 Helen's done it again! I was very attached to the original cover of Death in a Scarlet Gown (I'd never quite managed such a good bird picture before) but once again Helen has nailed it. The little building is part of St. Andrew's Cathedral, and of course the scarlet gown is the gown all undergraduates of St. Salvator's and St. Leonard's Colleges (not St. Mary's, which has a rather sophisticated black with a purple saltire) wore and, on many occasions, still wear (if I turn at my desk I can still see my own). They are thick and woolly, have an inside pocket just the right size for a half-bottle of whisky, and are the subject of a number of very strict traditions.

The cover will be available shortly on Amazon and Smashwords, and after the usual bit of cursing on Kobo, too.

I'm now two fifths of the way through Death of a False Physician, the second of the Hippolyta Napier books. The first in at the reading and editing stage - never before have I tried to produce two books so fast, but I have to try and hit a particular deadline, the anniversary of last year's awful flooding at Ballater and Aboyne. Next week I hope to visit Ballater once again to do some particular investigations - if they go well I'll no doubt talk about it here!

Posted by Lexie Conyngham at 08:48 No comments:

Steaming along on the Speyside line 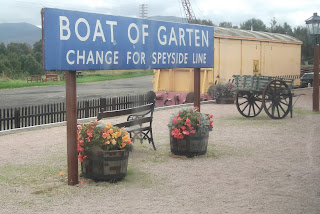 All a bit modern for either Charles Murray or Hippolyta Napier, but there's nothing like a steam train. This one goes from Aviemore to Broomhill (a.k.a. Glenbogle) and back in about an hour and a half via Boat of Garten, where we were staying.

The weather was fine and the dogs full of energy, but not so much time for walks. That gate through to the woods was too good to resist, though. 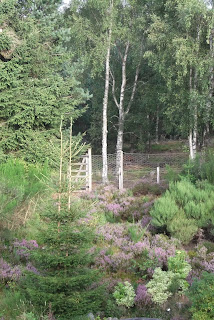 The whole monthly book blog and monthly shelfie have rather gone to the wall as I've been working so hard. I can say I've recently finished Rivers of London, The Third Rule, and The Art of Staying Dead, all of which I have enjoyed.

I'll stick in a shelfie, too: 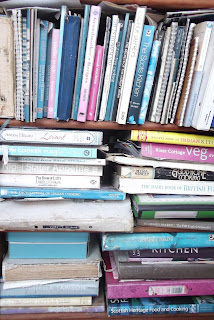 This is part of the recipe book collection, almost all extensively used!

And I have broken the ground on Death of a False Physician, the second in the Hippolyta Napier series - one and a bit chapters done! Now I need to go and write. Have a lovely middle of September, everyone!


Posted by Lexie Conyngham at 06:12 No comments:

A quick reiteration, in case somebody didn't get past the frog:

If anyone would like a PDF of the new book in advance in exchange for an honest review on Amazon and / or elsewhere, please send a request to contact@kellascatpress.co.uk. The PDF should be available on 28th. October, and the release date is (at present, anyway, and it's not likely to get any closer!) 30th. December. All published reviewers will be entitled to a free PDF of the second in the series, Death of a False Physician, due out on the same date (assuming you want one!).

And thanks to those who have already volunteered!
Posted by Lexie Conyngham at 07:14 No comments: