Outdoors with a pond

A good deal of outdoorsness this week, including a day on Allotment Major, planting tatties and onions and sowing broad beans, parsley, radishes, scallions, leeks, chard and beetroot, with my blessings on all of them and hopes for a good growing season. Planting tatties always makes me think of the anecdote in Barbara Kingsolver's book, Animal, Vegetable, Miracle, in which she tells of a year spent trying to be self-sufficient. A food writer acquaintance in New York phoned her to ask how things were going, and BK said that the potatoes were starting to sprout. A moment's puzzled silence, and then the food writer said 'Ah, what bit of a potato sprouts, exactly?'.

Yesterday afternoon I had the opportunity to spend a while on my own with a pond in the sunshine. It was a busy pond: three brown frogs stumbled on the earthy base, occasionally blundering through weeds and giving up, disheartened. Pond skaters and water boatmen plied their trade across the surface, while below sticklebacks, from the tiny to the two inch, cast tantalising shadows on the clumsy frogs. In a net of stringy black weed, a family of newts fussed and fidgeted, then one would go absolutely still and sink slowly to the bottom before scurrying off again. A chaffinch bathed nearby in the shallows, and in the midst of the weed a large toad lurked, waiting, before finally the moment was right and she pushed down to lay a cloud of spawn amongst the newts' black weed. Damsel flies, oblivious to this momentous event, flittered in the sunshine.

Where I am lucky enough to sit for half an hour or so on a Saturday morning, I'm on a level with a chimney at the back of a Victorian church. Two custard-yellow chimney pots stick up from it like a pair of abandoned artificial legs, but they are those chimney pots with little diagonal vents near the base, two sloping clay tubes on each pot. Here for the second year that I've seen, jackdaws are making their nests: it's a surprise the first time you see them shooting out of the holes like children in a flume, appearing so fast it seems like magic, then perching quite calmly on the chimney stack before flying off. You'd swear they were clearing their throats and checking to see that no one is laughing at them. Then it's back, a quick inspection, and hop back up into the tube and vanish.
Posted by Lexie Conyngham at 01:55 No comments: 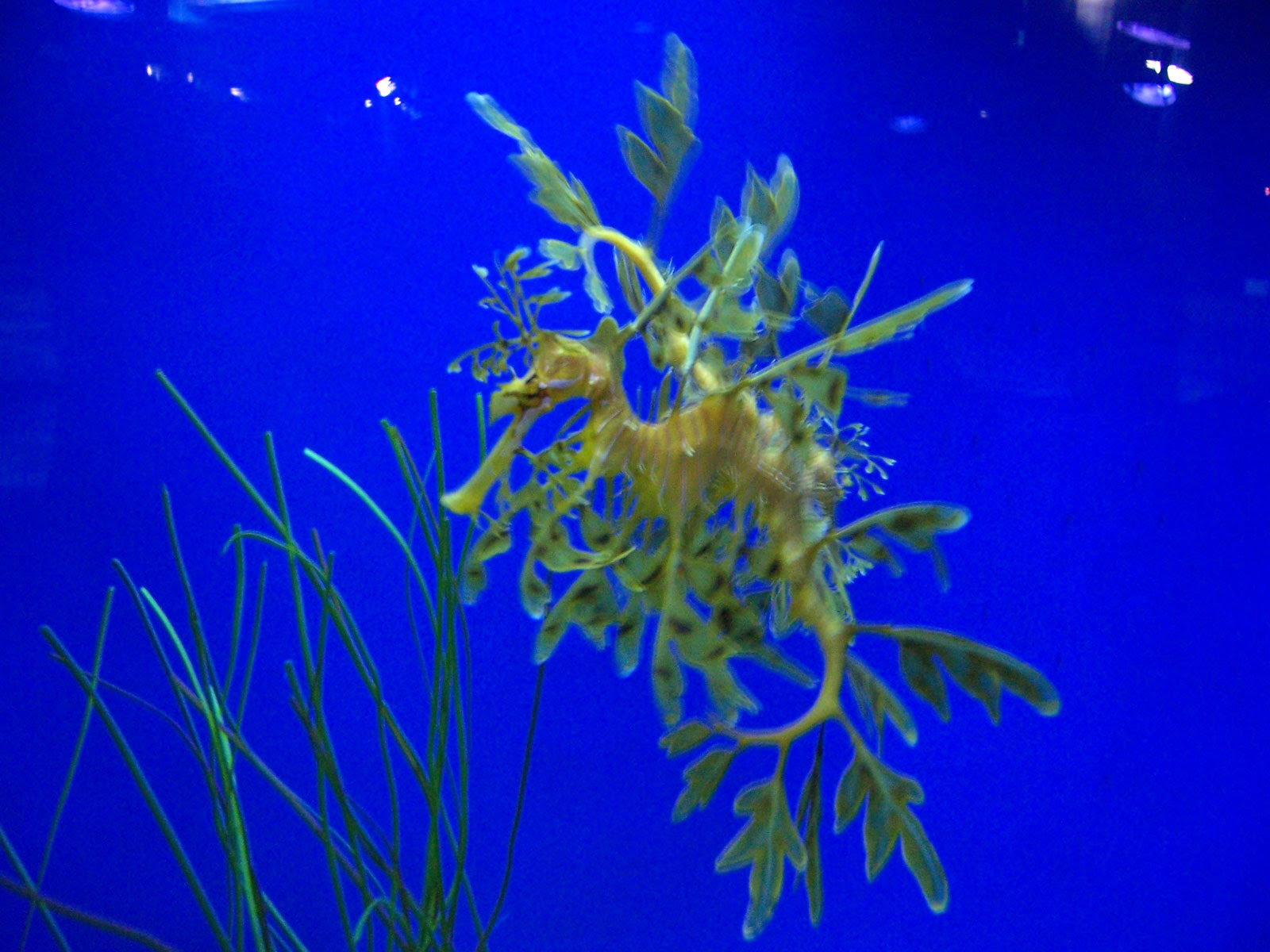 Sea dragons, eh? What would you do with them?

To try to describe them, to delineate them carefully in paint or in words, is simply to invite credulous cries and sneers. What, you would say, like that leather-backed slug-shaped reptile with feathers, glimpsed late one afternoon in the Natural History Museum, the one you could never find again, that looked like an economical April Fool stitched from the remnants of animals found lying around the storerooms? Or like that lizard you saw in the Serengeti, blue to the waist and pink above, as if it were wearing sparkly jeans, or as if a man squatted behind a nearby bush, dipping denim blue lizards halfway into pots of shiny pink paint?

Elongated, calme, supercilious seahorses, the dragons float arranged in curious flocks staring through the glass. A continent of forthright, sturdy, stalwart people, a land boasting poisonous snakes and spiders, brutal marsupials, a harsh landscape, off its coast is home to these elegant, magical cratures, twigs draped in wistful, pendulous seaweed, tails long and forgotten, staring at some distant fascination, some faraway dream. The fins that keep them hovering, slowly changing their direction, are so fine as to be almost invisible: the seaweed-like fronds drift about them, delicately careless.

If they were land dragons, you would expect fire, a thin, piercing flame from that precise snout. If they were seahorses, it would be something less supple, more active, jolly and real like a favourite pony. But these are dragons, the inhabitants of legends, no more real than mermaids or fairies. How can they be described?

Posted by Lexie Conyngham at 09:19 No comments: