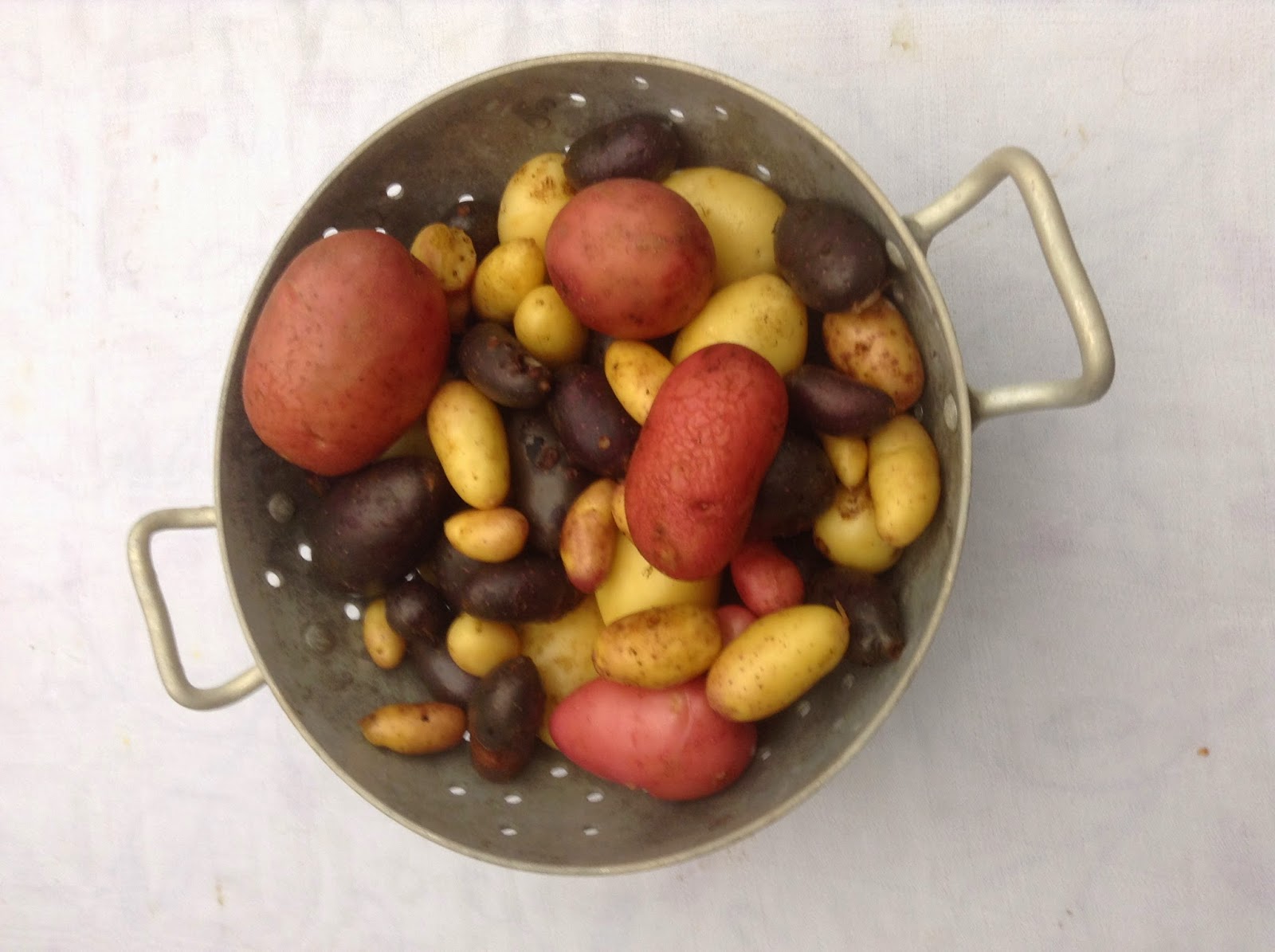 Some of this year's rainbow potatoes (well, rainbow-ish). Just an aside! Autumn's really here!


Interview with Daniel Hossack.
So you’re Daniel, then?

That’s right. Daniel Hossack, trusted manservant to Mr. Charles Murray of Letho. In charge of his household in Naples. I’ve a new coat and all.

Aye, because he took you with him to Italy, didn’t he?

Like I say, an older man. Not the kind to make the most of foreign travel.

But he’s off to India, now, with the master. I believe they’re off to help Mary, who used to be Mr. Murray’s maid?

How do you feel about Robbins going to India instead of you?

I’d like fine to see him when he gets back! He’ll never last the voyage, Mr. Robbins. He’s that pernickety they’ll never keep the ship neat enough for him, and he’s not accepting of the ways of foreigners, not like me. Oh, I’ve met some people, ken?

So you made the most of the foreign travel, then? How did you find the journey?

Well, I’ll tell you this: sea voyages aren’t all they’re cracked up to be. I don’t think they make ships properly. They make a gey awful noise in the least wee wind, and there’s no stability to them at all. I ken buildings can be mischancy things – I was there when the servants’ wing fell down, and that was no joke, I’m telling you. But the whole time I was on that boat, that’s what it felt like, as if the whole thing was cowping. You’d think they’d have that sorted out by now. Boats have been around a whiley.

I can see you feel quite strongly about that. But what about when you arrived in Naples? How did you manage with the language? You spoke no Italian dialects before, did you?

Naw. What for would you do that in Edinburgh or Letho? But it was easy enough to pick up. And the master gave me a few hints here and there: he’s no so bad at languages himself. The Frenchies seemed to understand him all right, I suppose. Not that he was in much of a mood to talk to them.

Of course, Mr. Murray had left Edinburgh under something of a cloud, hadn’t he?

Aye, that’s a fact. Oh, he hadna done nothing wrong! He’s all right, Mr. Murray, even if he’s gey hard on a body that might have made a wee mistake …

Hmm. Did Mr. Murray’s mood improve at all during his stay?

Not much. He’d gone to get away frae all that fancy society stuff, but it was like he didn’t know any other way to live, and anyway as soon as the high heidyins found out he had a bit of land he was in there. He didn’t much like the crowd, I’d say: he never said, but there was never much of a look of happiness about him when he was off to one of them things, the balls and the sorrys and the dinners. He didn’t get to see much of the place itself, just they big miserable villas. Now me, I got out and about and saw the world around me. I saw some remarkable things, I can tell you: sailors all covered in pictures, men the colour of Mr. Murray’s dining table, sea monsters laid out on a stall for food … and the vegetables! My, there are things in that country you’d never have thought you should eat at all, never mind raw as they came out of the ground or off the plant.  That garlic stuff: eat enough of that and you’ll never need a tinder box again!

Ah, yes, this would be Artemesia Fiorello?

That’s Mrs. Hossack to you! Aye, my bonny wee Artemesia …

And now you’re heading back to Fife with her? How do you think she’ll manage?

Well, she has me to protect her, of course. Oh, no doubt she’ll find it a wee thing confusing, poor lass, but well, she’ll have the bairn to look after, all being well, and that’ll give her something to think about while I do the serious stuff. I have to look after Mr. Murray’s luggage that he’s no taking to India, of course. It’s a great responsibility. There’s a table with the top made out of tiny wee stones all different colours, you’d never ken unless you look dead close …

Aye, heading back to Letho with my bonny wife on my arm. That’ll put William’s eye out! Not that he’s ever shown much talent in that line, poor old William – the other, er, the junior manservant. He was always sat there with his eyes on stalks when I told him of my latest conquest. Aye, the girls around Letho had little to fear frae my pal William!

Oh, aye, I kenned them well. And the Edinburgh lassies, aye. Oh, I’ve had some times, I can tell you!

But now you have bonny Artemesia. You’re a respectable married man, eh?

Thank you for your time, Daniel.


Posted by Lexie Conyngham at 01:17 No comments: