Scots words in Knowledge of Sins Past 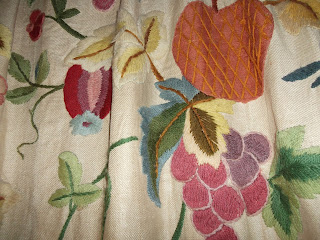 Some of these are duplicated from Death in a Scarlet Gown, but there we are: this maybe makes it easier!

Ashet: a large serving dish
Birl: spin round or over
Brose: usually barley broth, sometimes oatmeal in water. Athol Brose is whisky, cream and oatmeal as a pudding and can be very fine (and indeed very alcoholic)
Corbie: crow
Craik: croak
Creepie stool: a small stool made usually by amateur carpenters, suitable for kitchens http://www.orkneycommunities.co.uk/woodbgood/index.asp?pageid=1045
Crusie lamp: a wall-hanging oil lamp with a wick, cheaply made and used often in cottages http://www.ramshornstudio.com/early_lighting_4.htm
Dominie: schoolmaster (this time from Latin, dominus)
Feart: afraid
Gar me grue: give me the creeps
Gey: very
Girdle: griddle
Gob: mouth, or more generally face
Greet: cry, sob
Guddle: confusion, mess
Hapeth: halfpennyworth (that is, not much)
Heidyin: head one, chief
Hirple: to limp
Howff: a low drinking establishment
Ken: know
Kirk: church
Kist: chest. In the National Archives of Scotland in Edinburgh, there’s a group of Episcopalian Church papers known temptingly as the Jolly Kist – but it’s just a chest of papers that once belonged to Bishop Jolly. Ah, well.
Lum: chimney
Midden: dungheap
Neep: turnip, swede
Nyerps, give you the: annoy you, bother you, disturb you
Precentor: in the Scottish church, one who leads the singing of the psalms
Rammy: scrap, fight
Skelp: slap, spank, cane, generally for disciplinary purposes
Unchancy: unlucky
Wean: child, infant
Posted by Lexie Conyngham at 05:47 No comments:

Scots words in Death in a Scarlet Gown


These are some of the Scots words used in Death in a Scarlet Gown, the first Murray of Letho book. Some of these words are still in use, some are more antiquated. Others are used not only in Scotland but in northern England and Northern Ireland, too.

Ashet: a plate or large serving dish, from the French assiette. Loads of French influence in Scots.
Bairn: child
Baxter: baker
Bejant: a first year student at St. Andrews. The feminine, introduced when women were, is bejantine. At Aberdeen, a bajan or a bajanella. Thought to derive from the French bec jaune, yellow-beak.
Blackyirtly: blackguardly
Bunkwife: landlady
Cordiner: shoemaker. Also cordwainer
Flesher: butcher
Gallow-breid: a gallows bird
Gey: very, extremely
Gileynour: cheat, swindler
Greet: to cry, sob
Guddle: confusion, mess
High heidyin: literally ‘high head one’, the chief
Howff: a low pub
Humanist: lecturer in Latin
Hyte: mad, mad with rage
Ill-deedit: wicked
Ken: know
Kirk: church. Along with kist below, this shows the lovely interchange between Scots ‘k’ sound and southern English ‘ch’ sound, in church/kirk, chest/kist, breeches/breeks (ooh, I love languages!)
Kist: chest; also coffin, as a corpse is ‘kisted’ for burial.
Laldy: ‘giving him laldy’ equals ‘laying into him’, fighting strongly, or indeed ‘giving it/him wellie’.
Magistrand: a fourth year student at St. Andrews
Meschantly: wickedly, wrongfully
midden: a dungheap
parritch: porage
pleuchie: a yokel (a ploughman)
rector: the headmaster of a school
red: clear, clean, tidy
risp: a twisted iron bar, attached vertically to the wall beside a door, with a ring of metal round it to be rattled against it (a forerunner of the doorbell)
scunnered: fed up, put off, sickened of something
semi: a second year student at St. Andrews
shusy: a corpse for anatomical dissection (often stolen from a grave)
Snotterbox: nose
Stookie: a stook or sheaf of corn
Streeling: running with water or flying out in the wind
Tailzie: entail on property or land
Tawse: implement of torture employed by schoolmasters
Tertian: third year student at St. Andrews
Thole: put up with, tolerate
Posted by Lexie Conyngham at 03:35 No comments: One of the best crafts for hot weather! A lovely morning spent doing this, for no other reason than that the felt needed to be used (it goes bally otherwise) and the design was bubbling in my head. 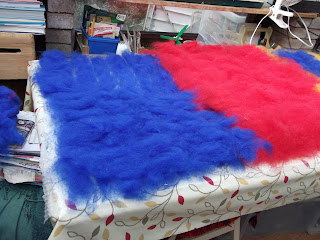 The backing was a cheaper, coarser Shetland fibre. 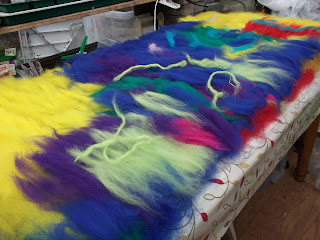 We layered it up then added softer Merino wool and some strands of silk - lots of leftovers from other projects. 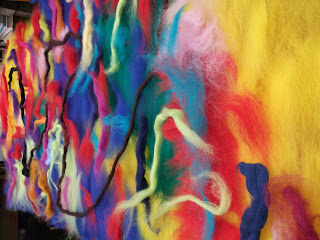 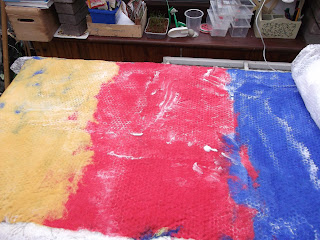 Soaking and soaping is fun! The kitchen was soon flooded, and we worked barefoot. 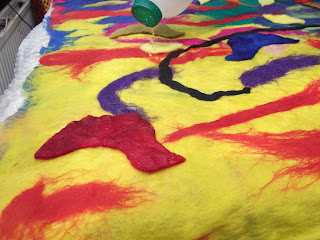 We added birds cut from prefelt, and soaked again. 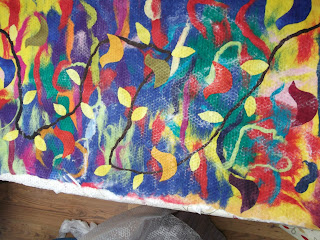 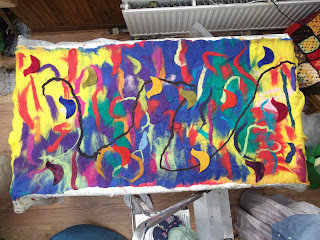 And as an aside, I mentioned before making beaded vamps for a project in Canada highlighting the number of unsolved murders of First Nation women and the number of unidentified First Nation women murder victims: we were the easternmost group participating in this art project and it'll be travelling soon round small galleries in Canada, with bookings up to 2017: visitors will get to walk a long route of red fabric on which hundreds of pairs of vamps will be arranged. Walking with Our Sisters - look out for it on Facebook, and it might be coming to Europe! Many of the vamps are beautiful - these are first efforts, though! 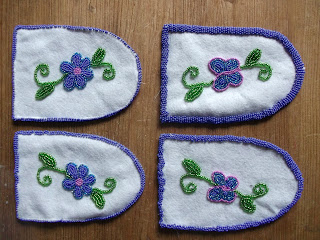 Posted by Lexie Conyngham at 03:37 No comments: