Here we are: it's live (paperback to follow as soon as I get my act together, which on current reckoning might be about January 2040 ...) 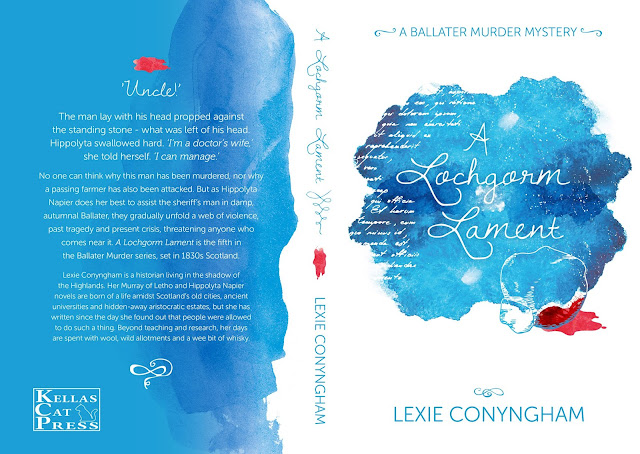 You can have the whole thing, front and back cover! When the illustrator said she was going for a rock theme (based on my briefing) I was half-expecting Queen or Status Quo, but she's much better than that! Anyway, it's available here and it's on Kindle Unlimited, so you can follow Hippolyta one page at a time if you wish.

As regards the rest of the marathon writing-fest, I'm still trying to get The Slaughter of Leith Hall, the 1763 stand-alone, finished in time to be out by Granite Noir towards the end of February, when I'll be reading from it on the Sunday and there's some kind of library event on the Saturday, too. Helen Braid of ellieallatsea sent me the cover today and it's great, but I still have a good third of it to write, maybe more. Part of it is set in Amsterdam, and having just come back from New Year there I'm keen to write that bit while it's in my head - ten thousand words this week wriggled into space where I haven't actually been working in the bookshop, cooking, doing laundry, or (perhaps) sleeping. Once this book is done, I'm taking a break, doing some research (at a reasonable speed) and, I hope, turning the Orkneyinga books into audiobooks.

Amsterdam was very good. I hadn't really set foot properly in the city before, and certainly not at New Year, which was completely insane - pretty much relentless fireworks, near and far, from 4pm to 3am. We were on a houseboat (which I would strongly recommend - Rhy Blitz) and were completely surrounded by something like a military offensive, and the city next day was covered in smog and bits of firework. However, on this occasion we enjoyed the Jewish history (open on New Year's Day), the Hortus Botanicus (never let it be said we visited a town and missed the botanic gardens), Rembrandt's house, the Van Gogh exhibition, the lovely Begijnhof (mentioned I think by Shirley McKay in one of her books), the Amsterdam Museum, a canal cruise, pancakes, croquettes, and a fantastic band of random players in the Rijksmuseum who included a violin, an accordion, a double bass and a balalaika. We missed, on this occasion, the Museum of Microbes, the Pianola Museum, the Torture Museum, and the Funeral Museum, and many others. Maybe next time.

I'm not going to learn Dutch, just at the moment. I'm thrilled enough with the fact that the other day I asked a Norwegian customer, in Norwegian, if she wanted her receipt. She leapt backwards and cried 'That's Norwegian!' Thank goodness, I thought: I hadn't pressed the wrong button on Duolingo and been learning Bulgarian for the last two years.
Posted by Lexie Conyngham at 14:20 No comments: