I've been working through some old favourites this month, and also starting my own next Murray of Letho book, which has cut down a bit on reading time. However, the indie author for this month is G.J. Reilly. His series of fantasy adventure books for young adults, The Book of Jerrick, is set in present day England and the plots are closely-woven and exciting. 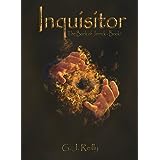 The first book, Inquisitor, gets off to an action-packed start, then settles down to a less exciting, more mysterious section with a schoolboy pondering his secondary school future and trying to get in to the alarmingly vague and horrendously expensive college that no one seems to know much about. Personally I’d hesitate to send any child to somewhere about which so little is known, but the Wares seem very proud of him. With unearthly powers at issue, there are inevitably Harry Potter echoes, but this is altogether more menacing and intricate, and the plot develops very differently. Two forces, the Inquisition and the Council, have spent centuries battling over various magical powers and objects, and it's not at all clear which of them is the good side and which the bad, if such definitions can be made at all. I did see the final twist coming but was happy to see it, nevertheless: sets things up for an enjoyable series, aimed at the YA fantasy readership.


Second in the series, Piper, takes us a couple of years into the future. 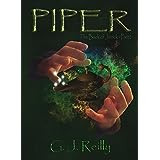 I haven’t read a book before which so directly took its inspiration from the Pied Piper legend and I don’t know why – I’ve always found it particularly chilling and this book plays very well on that. It also brings in references to other fairy tales in an intriguing way, weaving them into the history of the conflict between the two warring parties in this series, while still keeping the action moving in the present day. In plot terms this book is a step into maturity from the first book, but the excitement is still there and the fight scenes are fast-paced and convincing. The excitement is sustained to the end in a very complex plot which culminates in a very satisfactory cliffhanger, if that’s not impossible!
G.J. Reilly is working on the third in the series at the moment.
Published crime author for February is a recent arrival on the scene, Sally Andrew. Her first book in the Tannie Marie series is Recipes for Love and Murder.

Set in present day (or very recent) South Africa, this book feels fattening! With the twin themes of murder and cooking it’s almost too rich, and full of strong female characters in a way that seems overdone, were it not that the murder victim and the detective were both victims of domestic abuse. The book has a curiously claustrophobic, inward-looking feel which I can’t quite put my finger on. However, I warmed to it very much as it went on (I have a soft spot for anyone who uses a hotbox, or strawbox cooker) and the recipes at the end were a nice touch! I’m looking forward to reading another one, but with the Kindle edition of the next one at over £10 it’ll be a while!
Posted by Lexie Conyngham at 08:46 No comments:

Too reliant on modern technology ...

Two days ago, my mobile instructed me to insert sim card. Since there was already a sim card in it,  I went to one of these emporia staffed with young persons in stain-proof uniforms, so that they could sneer at my poor old piece of communication equipment.

'No, the sim's OK,' she said, selecting an ancient item from amongst a museum of phones to test it in. 'It's your phone - time for an upgrade!'

I wondered if taking the mud out of its innards would work, but apparently not.

'Well,' I suggested, 'what about a sideways-grade?'

'An equivalent,' I said, 'one that I can use to text and phone and listen to the radio. I don't want anything else.'

'Handy for live travel news, that.'

Some thought was applied by two young persons, and they decided that a relatively cheap Nokia was the only phone left in the universe on which you could listen to the radio. Unfortunate, as the layout of Nokias and I don't get on, and it is not built like a handheld suit of armour, which it needs to be to survive with me. It's already fallen apart once under very little provocation. You can't set the alarm to go off every day at the same time, but have to reset it each night (as I discovered in a panic this morning), though to be fair I never told the young persons I was advanced enough to use the alarm (maybe no  one uses alarms any more). The worst thing so far, though,  is that this phone uses exactly the same sound to tell you a message has been sent as the old one did to say a message has failed to go through.

Where did I put my carrier pigeons?

Though to be fair, again, it's very hard to listen to the radio on a pigeon.
Posted by Lexie Conyngham at 01:11 No comments: