Happy Easter to all when it comes (later for some than for others, I know!).

If you were expecting the newsletter and its accompanying novella today, and haven't received them, let me know at contact@kellascatpress.co.uk.
Posted by Lexie Conyngham at 01:52 No comments:

The Status of Murder
Chapter One

No one with any sense of occasion visited Fife. Not even in the summer, though it was hard to determine that this was in fact summer.
Three figures stood by the side of the road – again, the word ‘road’ seemed ill-applied here, with its connotations of solidity, definition, a surface one could rely on for the support of wheeled vehicles. The three figures were distinctly separate, each in their own little wet world, raindrops lining up eagerly along the edges of their hoods, yet they were united in misery, watching from the muddy bank as the coachman and the groom, clarted to the thigh, struggled to slide branches or stones or parts of their own anatomies under the wheels to free them and the horses from the mire. It was impossible to see far in either direction through the veils of rain: their progress had been so slow it had become impossible any more to calculate how long it might take them to reach the nearest shelter, if they would ever reach it.
And yet even in their mutual despair, each of them had some purpose to drive them towards Scoggie Castle. That, and the fact that turning back at this point would be just as filthy as going on.

(if you're already on the mailing list you'll receive the full story on Saturday! If not, and you'd like to join, then email contact@kellascat.co.uk to sign up for quarterly newsletters from the worlds of Murray, Hippolyta and others).
Posted by Lexie Conyngham at 03:31 No comments: 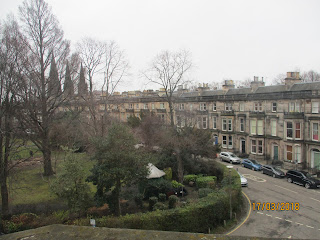 I'm trying out a new camera, but I'm not sure I'm that impressed so far. It was an emergency buy, which usually doesn't work for me. Anyway, this is a typical 3rd. New Town crescent in Edinburgh, with its central gardens - in Murray's day it's possible they would have grazed sheep there, as they did in the older squares.

Then it was off to Perth, where I overlooked the underrated Tay and the new flood defences. The weather was beautiful the first day and the river was racing when I first checked in. 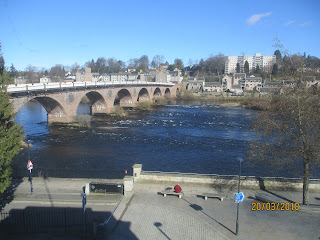 You can see the dark rectangle of a flood gate towards the bottom left of the picture. Then a sculpture caught my eye and annoyingly the camera doesn't zoom, so I set off to take a closer look. 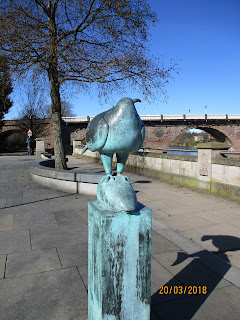 From above it had looked like a moulting peacock sitting on a carp, but it's a gull on a salmon, as you can see from the shadow!

Then I took a closer look at the flood defences. Every pillar has a carving on it, so I pottered the length of the wall, snapping them. Here are a few favourites: 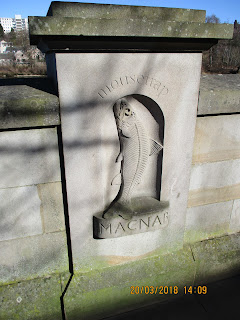 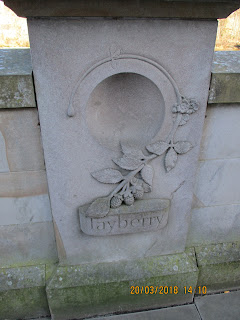 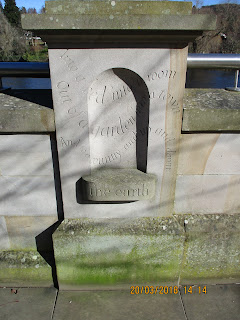 They hadn't stinted on the metalwork, either! 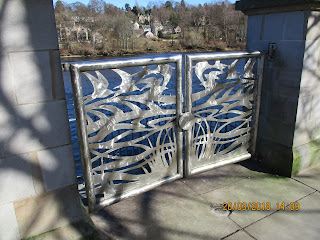 The river was glorious, and starting to calm a little. 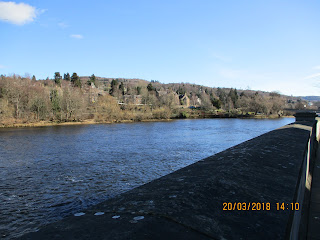 and by the early evening it was a soothing rush to lull me to sleep. 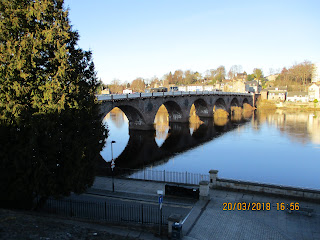 Well, if you've lasted this far and you haven't already bought it, A Murderous Game is 99p till next Wednesday! No particular reason - think of it as an early Easter egg, and much less fattening!

Posted by Lexie Conyngham at 03:26 No comments:

Here's another author who needs little introduction on this blog, and one I'm very pleased to return to.  With most of his books registering around a 2.5 on the Conyngham Scale (that is, closer to noir than to cosy), it won't surprise you to find that the author is an experienced CSI himself in Yorkshire where the books are set, and the main characters of two of his series, Roger Conniston in The Dead trilogy and Eddie Collins (oh, poor Eddie - what he puts himself through!) in, for example, Black by Rose. But it's not just blood and gore: these thrillers are both action-packed and decent brainwork, with convoluted plots that all come together nicely in the end, even if the main characters are not always happy. And the authenticity of the forensic investigation - even if Eddie pulls it out of shape - shines through. There are plenty of books in the Andrew Barrett canon - it's well worth starting each series at the beginning and working through. It won't take you as long as you'd like, but there'll be more on the way!

Stop Press: Bloodhound Books have just announced that they've signed Andy for his Eddie Collins books, so if you want to be a purist and only read indie, you'll have to stick with Roger Conniston. But I'd recommend both.

I'm not supposed to be writing the first book in the next series until April, but somehow I'm just starting Chapter Five! Completely incorrigible. And here's the reveal - it's to be called Tomb for an Eagle.


Mailing list people will be getting a Murray novella along with their March newsletter. It's set in Scoggie Castle not long after Murray's appointment to tutor the young Scoggie boys. More information to follow!

If you're interested and you haven't yet bought Jail Fever, it's 99p on Amazon from today till next Thursday, 22nd. If you like it, leave a review! 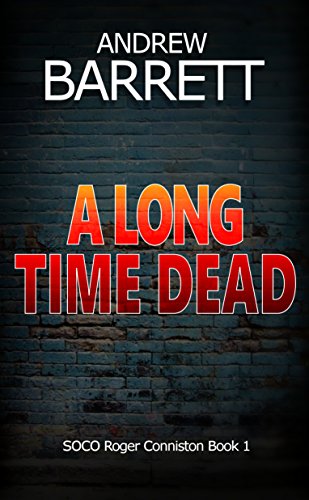 Posted by Lexie Conyngham at 01:54 No comments: