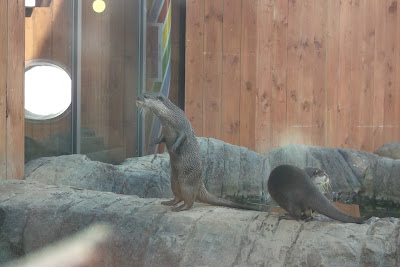 I feel there should be some kind of caption competition for this! Saw these delightful individuals last week, at a seal sanctuary: seals are harder to photograph, though the otters move pretty fast too.

I'm in the midst of trying to get my head around organising an actual physical book launch for A Knife in Darkness on 30th. December - it's already an online launch, but as the profits from this first one are going to the Ballater Flood Fund, I want a bit of a higher profile. This is the time when a manager or an agent would come in very handy! and Indie publishers have to rely on friends ... and those of us who have spent the last four months frantically writing have no friends left, of course. So I talk to the otters!

This birch wood is a bit further west than Ballater but the feel is much the same - September, this one. I'll have to start a Pinterest board for each of the two new books - there's already one for each of the old books. The second book, Death of a False Physician, is now at the proof stage and both are just waiting for their covers - that's an exciting moment, for me! There'll be a cover reveal here on 30th. November, a month before the book launch. 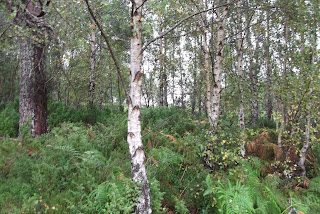 Posted by Lexie Conyngham at 04:36 No comments: