Well, it’s always worth replacing my annual Granite Noir pen. I arrived early to claim my author’s bag and was taken up to the Authors’ Room, where all the bags were laid out with hand-written labels – James Naughtie, Kezia Dugdale, REAL AUTHORS, and actually me as well! But Stuart MacBride was already nattering away to some other well-kent face so in shyness I went back downstairs to wait with the audience in the bar – not so shy that I didn’t sit wearing my author’s pass conspicuously, hoping someone might as who I was!

It’s a good deal busier at this first event than it was two years ago – that was a dozen middle-aged women in winter coats, nothing else to do on a Friday afternoon, stolidly silent in the bar, waiting to be unimpressed.

Interesting that Stuart MacBride is here already – he’s not ‘on’ till tomorrow though I suppose he has to be here (or in the Music Hall) for the reception at 5p.m.

Inside the theatre the set-up is very familiar from previous years, black and a bit dusty looking. This is not a grand theatre, but an art studio, hosting all kinds of oddities. Two two-seater ‘leather’ sofas, and a Waterstone’s stall to one side. Red flowers in small, dramatic arrangements, water bottles, hot lights. Crumbs, it is warm in here. Should I change my plans for what to wear tomorrow? The first panel is Tony Kent, barrister, and Abi Silver, solicitor, interviewed by Edi Stark, grand dame of Radio Scotland. She talks across them and points to them with her pen, a brisk command, when she wants them to answer a question. The solicitor is much quieter, the barrister performs.

After the panel I sprint home to fetch forgotten tickets and am sprayed by a juvenile delinquent of a seagull. I investigate the contents of the Author’s Bag. It includes a can of Granite Noir India Pale Ale and a buttery – good to see Aberdeen being promoted as a city of culture, not to mention healthy eating! 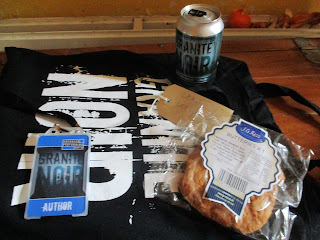 Back at the Lemon Tree I popped up to the Authors’ Room to find the first Local in the Limelight, Emily Utter, to wish her luck. I think she thought I was about to attack her! I’ll miss two of the other locals, just how it works, but I’ll try to see Jan and Eric if I can. One event down and my hair is everywhere and my nails are chipped already. I’m better in an allotment than anywhere where I have to look the least bit formal.

The first year they wound the place about in police tape, last year it was wanted posters on the stairs. This year there are books everywhere and Victorian mugshots from the City Archives on the walls. How embarrassing if one happened to see an ancestor!

Next panel, Mark Billingham and Yrsa Sigurdardottir. Again he’s a little dominant, ex-actor, but she holds her own with dry Icelandic humour. The interviewer is Fiona Stalker, usually doing Out for the Weekend on Radio Scotland on a  Friday afternoon. She’s a business-like Peter Pan, a fidgety bundle of energy, but the three seem to get on and bounce off each other well.

I meet a lady I spoke to at the launch who booked her accommodation the minute GN dates were announced, even though she only lives about ten miles away. I gave her my first bookmark, and worked up the nerve to ask permission to put a bundle of them in the leaflet rack that everyone stares at as they’re queuing to go into the theatre.

A break, then: there’s another talk, but if I go I’ll be late for the reception and as I have to track down my tickets I’d like to be early. An hour, then, snacking in Pret, insurance in case the GN gin is flowing, trying to take forward the plot of Murray 11. I’ll be two chapters behind by the end of today but it’s almost impossible to put out writing when so much information is coming in, like learning to play the didgeridoo. Due to a netball accident on Wednesday I’m wearing contact lenses instead of my now-wonky glasses.

When I popped into the Authors’ room to wish Emily luck, there seemed to be four authors in a huddle down one end, and Emily pressed into the corner of a seat with only Lee, one of the organisers, to talk to at the other. I keep hearing how friendly crime authors are but that little snatch of an impression didn’t look that way. I imagine I’ll find out for myself tomorrow. One never knows.

Reception was quite good. Naturally the authors and journos kept themselves mostly to themselves, the local librarians and archivists in another group, and local academics in a third. Abi Silver, though, was very friendly and came to chat – first visit to Aberdeen, and we failed to convince her that there is indeed a beach to walk along. She should have found out by now!

After the reception, the star event: Nicola Sturgeon in conversation with Abir Mukherjee. Entertaining and informative, and I was more impressed by the First Minister than I expected to be. She is clearly a big fan of crime fiction – apparently she tweets about it endlessly. No bus afterwards for about half an hour, so I walked home, and bought his first book on Amazon.
Posted by Lexie Conyngham at 00:54