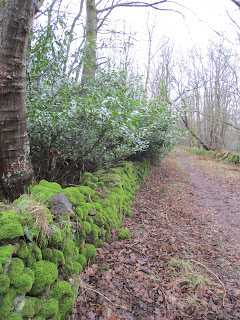 The Boxing Day walk, gentle but rather lovely. 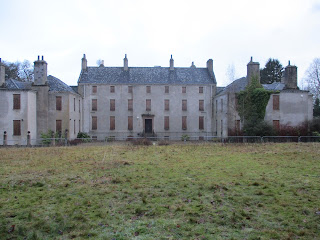 Culter House, currently empty - so we all started to make plans for what we would do with it. At least the roof looks sound ...

The new Ballater Bugle and a short story, Jo, went out today - if you were expecting these and didn't receive them, or if you'd like to receive them and haven't signed up yet, send us an email at contact@kellascatpress.co.uk - before my computer packs up completely!

My blogging pattern went for six towards the end of the year - if you were enjoying the indie authors or the crime about Scotland series I do apologise. I had pretty much reached the end of my tether and was busy tying a knot to hang on to. I hope to do better in 2019!

The plans at present are for a new Murray book, the eleventh, by about Easter (though it requires a good deal of research so it might take a little longer), a new Orkneyinga murder in around the summer, and (though it seems so far away I have no idea if I'll manage it) a new Hippolyta by Christmas again. But who knows? At the moment I'm feeling pretty shattered, so I'm only starting tentatively on that schedule. I'll do my best.

I'm hoping to do a bit better on Instagram this coming year (posting twice over three months, which I've done so far, is not perhaps high profile, but as I don't have a smartphone I have to find a co-operative smartphone owner before I can post). If you haven't already, do take a look at my Pinterest boards. They're not updated frequently, but for each book you'll find some illustrations I've used for research or inspiration, and I have to say I enjoy putting them together. You can also follow me on Facebook. There is a plan for a new website soon (hm, maybe!) but I intend to sustain this blog here and just have a link to here from the website.

Well, there you are ... it almost looks like a scheme for a year! Then there's the garden, the allotment, the knitting (I'm trying to make a 'Viking' pattern jacket for a reading in February), the household, the paid work, the animals, the netball - in no particular order. Who knows, maybe for some of the year I'll even be half-organised?